The Drill Sergeant Identification Badge is a military badge of the United States Army which was first issued on January 15, 1958. It is also nicknamed the "pumpkin" patch due to its jack-o'-lantern-like appearance when worn in the non-subdued pin-on version and in the color sew-on version worn before insignia was subdued in the 1950s and 1960s. The badge is presented to any NCO who has completed the Drill Sergeant Course at any U.S. Army Drill Sergeant School, and has been assigned as a drill sergeant at a U.S. Army training command. 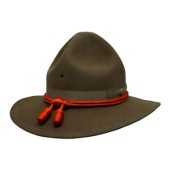