The "Bear" Bryant Fedora Hat
Paul “Bear” Bryant started coaching for the University of Alabama in 1958 and gave the University multiple Championships during his coaching.  He started wearing his Houndstooth hat for game days and it became his tradition.  It is reasonable to say that Bear Bryant was instrumental in revolutionizing Crimson Tide football.
Nowadays many Alabama fans wear the Houndstooth pattern made famous by Bear Bryant.  Many Alabama fans show their love for the black and white houndstooth hats and accessories in every game.  Miller hats have been servicing the Bear Bryant fans with the Houndstooth Fedora Hat for many years.  Bear Bryan Hat is available to ship right away.  Order your hat TODAY!
Paul W. Bryant became one of the most famous college coaches in football history.  He is not just an icon in the University of Alabama but he was a determined coach who inspired many others.  His popularity was not only his coaching method but also his fashion.  Based on history,  he received his first houndstooth hat from New York Jet owner Sonny Werblin. read more 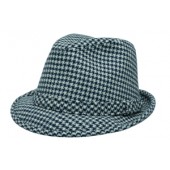