The Blues Brothers are a blues and soul band that became popular in 1978.  The band was made by comedians Dan Aykroyd and John Belushi, they later became famous for their Hollywood film “The Blues Brothers”.  The idea of wearing a suit in the film was primarily inspired by Jazz performers from the ‘40s, 50’s, 60s who almost always wore a formal suit.  On the other hand, the idea of wearing a fedora hat was inspired by John Lee Hooker, a famous blues singer who wore fashionable hats.  For The Blues Brothers film, Dan and John wore black suits, with white shirts, skinny ties, black glasses and the famous stingy brim black fedora hat.

After researching the specifics of the Blues Brother hat, we came up with a variety of top of the line Fedora Blues Brother hat.  Our designs are available in high quality fur felt and lite felt fedora hats.  The high end hat we carry was designed with a centerdent crown, a 2” wide grosgrain band like the original hat worn by the Blues Brothers, with roan leather sweatband and the famous miller hat satin liners.   If you are serious about hats, Miller Hats online is the place to shop.

Blues Brother hats are IN STOCK and available to ship TODAY! 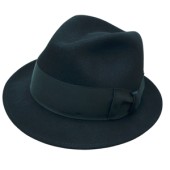 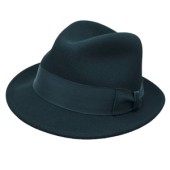 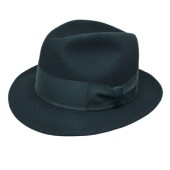